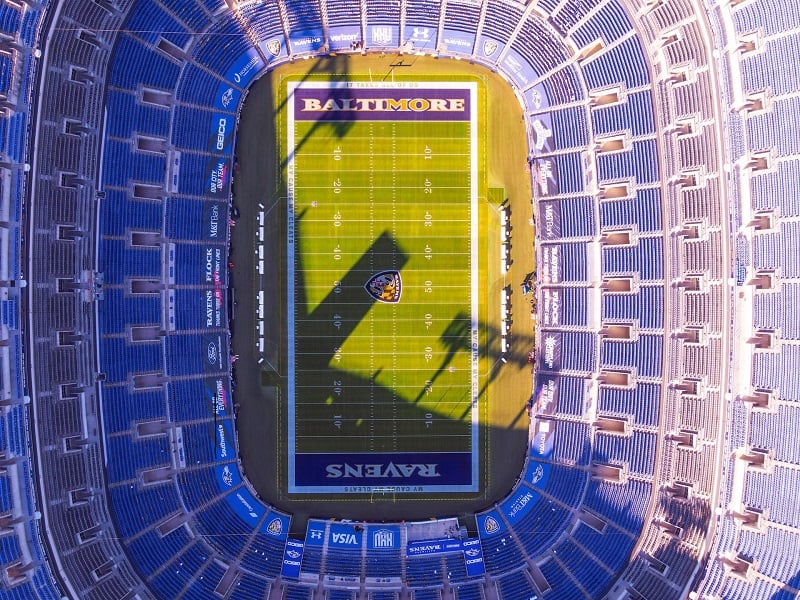 Join the flock at M&T Bank Stadium this season. Here’s all you need to know before the next Baltimore Ravens game at home. We’ve also got a quick review of the team’s NFL journey for new fans and some must-know tips for cheap Ravens gameday parking.

The Baltimore Ravens have been one of the most successful NFL franchises since their first season in 1996. However, they had some controversial beginnings, with the Colts moving to Indianapolis and, later, Art Modell taking his Browns personnel from Cleveland for his new franchise in Baltimore.

26 years later, the Ravens have made their mark in the league with a strong defense and two Super Bowl championships. In addition, they are one of the only two teams to have not lost at multiple Super Bowl appearances; Tampa Bay Buccaneers is the other franchise.

Baltimore Ravens is a member of the NFL’s American Football Conference (AFC). They played in the AFC Central division for their first six seasons. After the 2002 realignment, they moved to AFC North.

Here are a few other things you must know about the NFL team:

How do you get Baltimore Ravens tickets?

All NFL teams and stadiums use only mobile ticketing. You can buy tickets online through the official website. Digital passes are accessible through your phone, and you can manage them with the Raven app.

Find out how to manage digital tickets for Ravens games here.

The lower bowl has 42 rows, divided into two sections. The sideline seats on the upper bowl are numbered 1 – 32, but in the upper-end zones, the rows range from 1 – 26.

ADA/Accessible seating is available on all levels of the Baltimore Ravens stadium; available on a first-come, first-served basis only with pre-booked tickets.

The Ravens played their first two NFL seasons at the aging Memorial Stadium until their home in Camden Yards opened. MLB’s Baltimore Orioles had already left after the 1991 season when Oriole Park opened. The stadium was eventually demolished by 2002.

The new Ravens Stadium at the Camden Yards Sports Complex was ready by the Ravens’ 1998 season.

“The Bank” opened in 1998, right next to Oriole Park at Camden Yards. The multi-purpose venue has a total capacity of 71,008, with 128 suites and 8196 club seats. Though Baltimore Ravens operates the stadium, Maryland Stadium Authority owns it.

MSA first sold the stadium’s naming rights to PSINet in 1999; it was originally called the Ravens Stadium at Camden Yards. However, the commercial internet provider filed for bankruptcy in 2002. After that, they used the original name until M&T Bank bought the rights in 2003 for 15 years. It was renewed in 2014 and extended till 2027.

The comprehensive list of all NFL Teams and stadiums (2022): See Here

When do the gates open for Baltimore Ravens games?

Stadium re-entry is not allowed for general admission. Club-level ticket holders must obtain a re-entry pass before exiting. You’ll have to present the re-entry pass and your game ticket to enter the stadium again.

Baltimore Ravens Stadium at Camden Yards has a total of eight gates. Gate A and Hamburg Gate on the north side, Gate B on the east, Gate C, Gate D, and a media gate on the south, and two more gates on the stadium’s west side.

How to reach M&T Bank Stadium for Ravens games

Baltimore Ravens’ home is at 1101 Russell Street near the Inner Harbor, south of downtown Baltimore, and is easily accessible via I-95. The Hamburg Street bridge is to the north, I-395 and light rail to the east, the Russell Street viaduct is to the west, and the Ostend Street bridge is to the south. So you’ll have no trouble finding your way to the Ravens’ game. But check out detailed driving directions to the stadium lots here and use the map below to plan your route.

The gameday shuttle departs from Carney, Jessup, South West & White Marsh, Manchester, Westminster, and Owings Mills. The Ravens Walk buses depart 3.5 hours before kickoff. White Marsh, Carney, and Southwest have multiple leave times, and last-minute walk-ups are allowed. For other stops, you have to pre-book your pass; season rates range from $270 to $300, and single-game bus passes cost $30 to $35.

Ravens Bus parking is along Russell Street near the stadium. All buses begin departures right after the final whistle; the last bus leaves no later than half an hour after the game.

How far is M&T stadium from the airport?

The Baltimore/Washington International Thurgood Marshall Airport (BWI), located 9.6 miles from M&T Bank Stadium, is the closest major airport. Taking MD-295North to get to the stadium will take about 14 minutes. You can also take I-195W and I-195N, adding 11.4 miles and 16 minutes to your journey. The time required to travel via MD-170N and MD-295 N is approximately 18 minutes.

Parking for Baltimore Ravens home games at M&T Stadium may look tricky if you don’t have a permit. All stadium lots are reserved for permit holders, but there are plenty of off-stadium lots around the Camden Yards Sports Complex.

Parking permits are sold in advance and delivered digitally. You’ll need the Ravens app to gain access to the M&T Bank Stadium lots on game days. Season pass holders use the Horseshoe Casino Garage and have two options: A reserved parking space for all Ravens games on levels 3-6 or valet/premium parking on levels 1 and 2.

Where can I find the best Ravens gameday parking?

Downtown Baltimore garages are the best choice for gameday parking – you’ll find many within easy walking distance of the Ravens Stadium. The closest spots will cost you $45 – $80; the lowest rates are $10 – $15 at lots further away from the stadium. But nothing is too far from M&T Bank Stadium. However, you may worry about safety and peak pricing. Parking apps like Way can easily solve that problem. Pre-booking your Baltimore Ravens parking before the game is best for a guaranteed spot at the best lots.

How to find cheap parking near M&T Bank Stadium

The best M&T Bank Stadium parking deals are available online. You can use Baltimore parking apps and websites to compare options and instantly book a spot for the cheapest rates. For example, on Way.com, you can check out multiple parking facilities and use filters to narrow down your choices. Most parking operators also offer special rates and discounts on gameday parking booked via apps.

A last-minute parking spot hunt won’t work out well – there’s no guarantee you’ll find a spot close to the stadium just before the game begins. If you are trying to save a few bucks, consider parking at cheaper garages away from the busy downtown and Inner Harbor neighborhoods – especially if you are driving to the game from another city. You’ll find affordable all-day parking (up to 24 hours) in Baltimore for $15 – $30.

Read: Parking in Baltimore: Visitors’ Guide to the Best Spots and Deals

Is there bike parking at M&T Bank Stadium?

Bike parking outside M&T Bank Stadium is between gates B and C, along the Gwynn Falls Trail. Security personnel monitors this area during Ravens games.

Is there ADA/Accessible parking for Ravens home games?

Apart from a valid ADA license plate/hangtag, you’ll also need the state MVA disabled registration car, state-issued ID, and a valid game ticket to access the ADA parking at M&T Stadium. In addition, the ADA ID holder must be in the vehicle.

Tailgating is usually not allowed at M&T Bank Stadium lots and premises for Ravens games. But the Ravens Walk is the “ultimate tailgating experience” for fans attending home games.

Ravens Walk – the walkway from Oriole Park to M&T Bank Stadium (between lots B and C) is the designated pre-game entertainment area. It is open three hours before all Ravens home games.

Previous Post : « The Ultimate Guide to Cleaning Your Car after Halloween
Next Post : How to Get a Car in The Sims 4 without Any Mods? A Step-By-Step Guide »