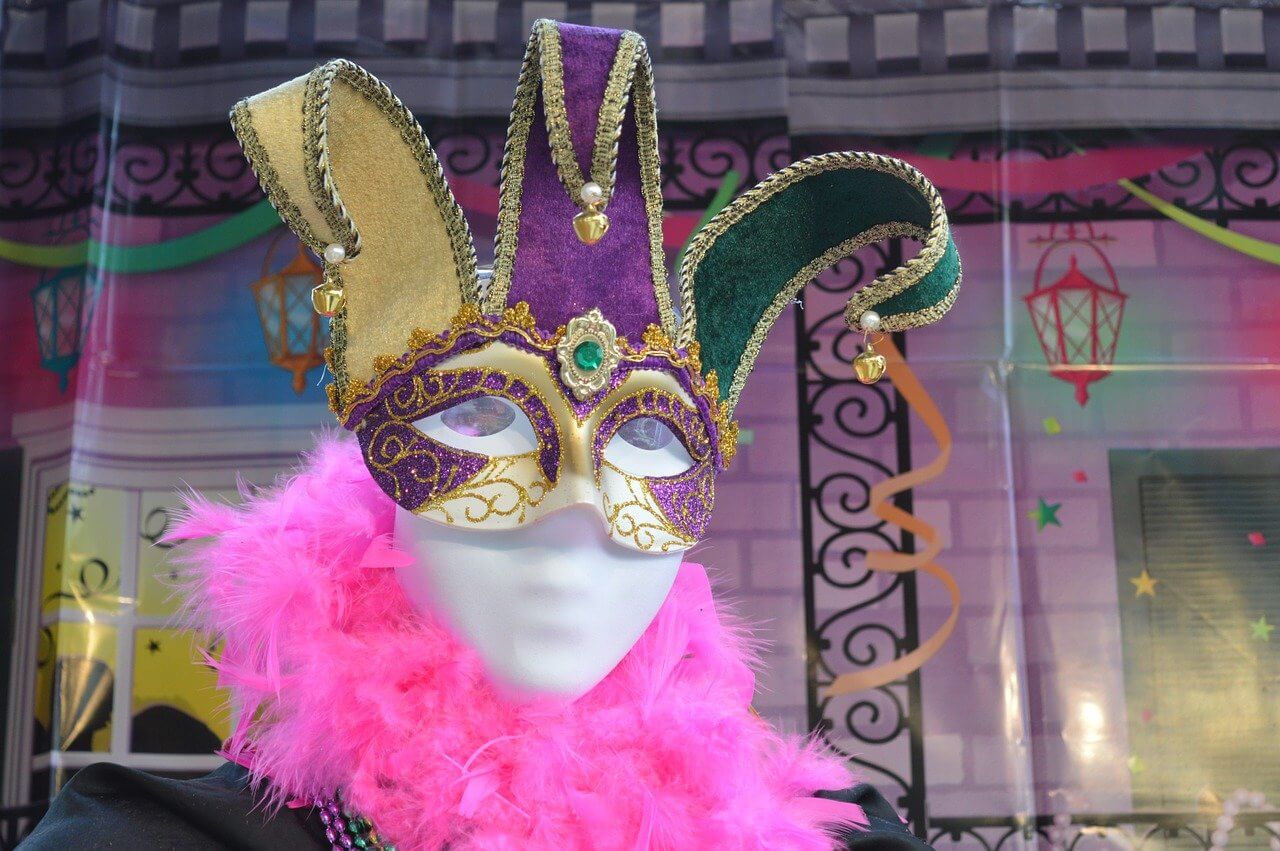 The Mardi Gras is back again! With over 70 parades planned for the  Mardi Gras Parade in 2023, New Orleans’s streets will soon be awash in purple, green, and gold. The only thing that can possibly put a damper on your Mardi Gras spirit is not knowing where to go or where to park your car during the parades. Here’s all the info you’ll need to enjoy the Mardi Gras Parade this year.

Each year New Orleans goes all out for Mardi Gras celebrations! You can expect wildly extravagant floats, wonderful music, and delicious food during The Mardi Gras Parade 2023. 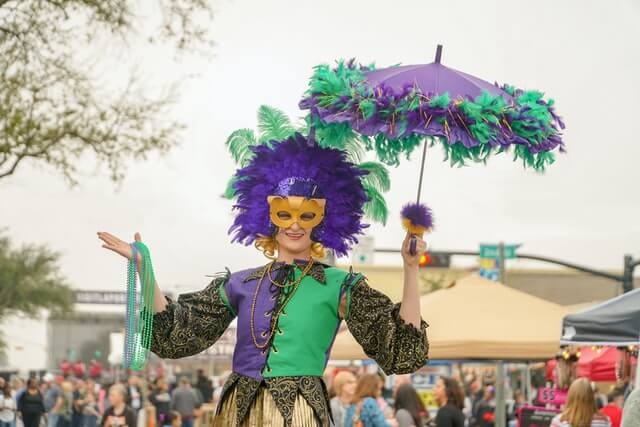 To celebrate Mardi Gras, revelers don gorgeous and colorful costumes or dress in purple, green, and gold garb. Another thing you’re likely to see a lot of people wearing are long strings of beads they’ve snagged off past parade floats. In the streets, you’ll witness a lot of people dressed in eccentric costumes, as well as children and their parents enjoying a fantastic time together. During the breaks between the parades, spectators can sit on the ground, throw balls, play music, and enjoy delicious food while watching the people pass past. Most non-essential businesses are closed on Mardi Gras day in observance of the holiday.

Mardi Gras this year will be on February 21, 2023. Carnival Season officially begins on January 6th.

Each year on January 6th, King’s Day (Feast of the Epiphany), the Carnival season officially begins, but the main revelry in New Orleans takes place over the 14 days leading up to Fat Tuesday. Fat Tuesday is the last day for Christians to eat and drink anything they want before the 30 days of Lent begin on Ash Wednesday.

Where is the Mardi Gras Parade?

How do I get there?

New Orleans is well-connected by air, rail, and road. How to get there depends on how much time you have to spare for travel. You’ll be disembarking at the Louis Armstrong New Orleans International Airport (MSY) if you’re flying to the Big Easy. MSY Airport is 15 miles west of New Orleans. You’ll need another 30-45 minutes to get to the actual parade routes. Almost all the New Orleans parades head down St. Charles Avenue and into the Central Business District. So that’s where you’ll need to be. Contrary to popular perception, very few parades go into the French Quarter because the historic section of town has narrow streets. To see the parade, you will have to leave the French Quarter or go to Canal Street at the edge. 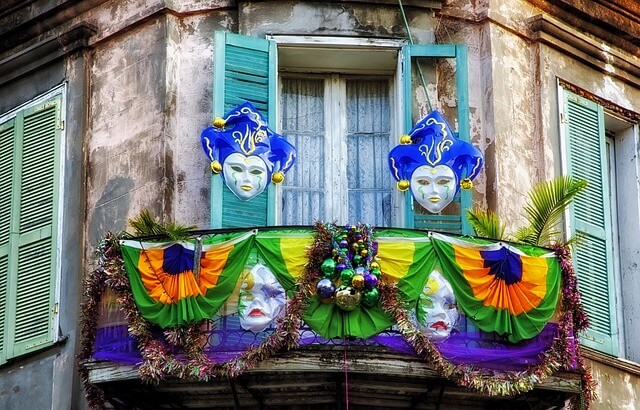 Once you’re in New Orleans, you can drive down and park close to the parade routes, or get there by streetcar, bus, bike, taxi, rideshare, or pedicab.

What are the best Mardi Gras parades?

Local organizations called krewes (pronounced “crews”), exclusive groups made up of members, organize Mardi Gras parades. Each krewe has a signature ‘throw,’ or an item that they’ll throw out to the parade watchers. 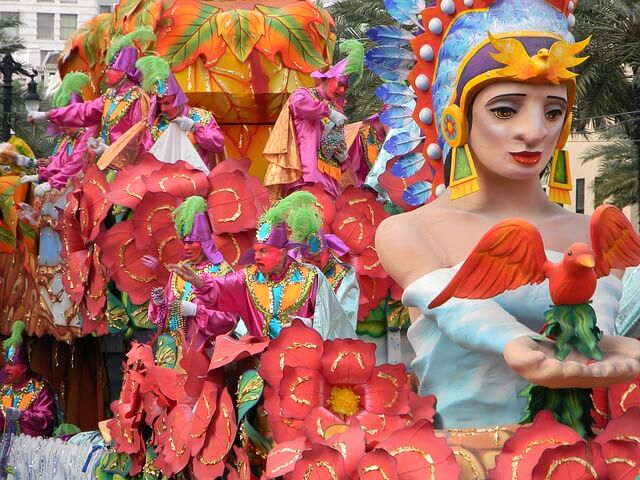 A few parades stand out as the largest and most extravagant, and these krewes are known as ‘super-krewes.’ Endymion, Bacchus, and Orpheus are krewes who have attained this prestigious position. Theirs are the parades you must not miss. The Krewe of Muses (an all-female group), the Zulu Parade (a historically Black krewe), and the Krewe of Rex (an all-male group) are some of the other stand-out parades.

What are the Mardi Gras Parade routes for 2023?

You can find detailed routes of all Mardi Gras parades here.

What Mardi Gras parades are today?

Parades start in January with different krewes and routes each day. You can get detailed info on the krewes below and see their customary procession route on their official calendar schedule. Please keep in mind that events and activities are subject to change at any time. Keep an eye on the website for updates.

What should you bring to the parade?

A parade can last from one and four hours, so be sure to arrive early. It may also take a little while to get back to your car after the parade. This means you need to be prepared. Here are some of the items you must bring to a Mardi Gras parade.

How long is Mardi Gras?

Mardi Gras lasts all day for 24 hours. To be precise, Mardi Gras is Tuesday which concludes the season of Carnival. However, most locals use Mardi Gras to refer to the entire Carnival season.

The weather during Mardi Gras can be very cold or very warm. Make sure to layer your clothes because a cold morning could turn into a warm afternoon. This is a good idea because the weather can change quickly from one extreme to another on the same day! Because you’ll be outside for a long time, pack comfortable shoes and clothes that can get a little dirty. You can also expect the occasional rains during Mardi Gras parades. So carry along rain ponchos or an umbrella.

Where can you park during the Mardi Gras Parade in New Orleans?

You must remember that parking is restricted along parade routes 2 hours before and after the parades. This allows floats unhampered access to the route and for cleaning up afterward. You’ll be alright if you just follow the posted signs. You could also plan ahead and reserve a guaranteed parking spot. Some places you can pre-book parking are

During Mardi Gras, the authorities enforce parking rules rigorously. This is usually quite the windfall for tow firms and the city’s parking violations bureau. They’ve issued more than 20,000 penalties during the festivities. Towing your vehicle can cost you between $125 and $175, depending on the nature of the parking violation.

Finding street parking near a parade or in the Central Business District, French Quarter parking, or Faubourg Marigny is notoriously difficult, especially during the last five days of Carnival. Remember, the closer you get to a parade, the more likely you’ll be trapped in traffic. If you’re driving to a parade, plan ahead and find a safe, legal parking location. Parking enforcement is particularly stringent along or near parade routes, so avoid parking too close to a curb or a fire hydrant, and avoid blocking driveways.

When Mardi Gras is in full flow, navigating the streets of the French Quarter may be a challenge. If you have a car, park it near the French Quarter. Canal Place, located at the end of Canal Street, is also a viable choice if access is not obstructed by a procession. In addition, you can find off-street parking in the Central Business District. However, “special event” parking prices may apply at any lot or garage in the French Quarter or downtown.

Be aware of the parade schedules and routes while driving during parade season. Traffic jams are common around parade routes, so knowing when and where floats are rolling and planning your route ahead can save time and stress.

Always remember that streetcars have the right of way. And don’t assume that just because New Orleans allows alcohol consumption on the streets means that cops are lenient when it comes to drinking and driving – far from it. They are especially alert around Mardi Gras since they know people are partying. Don’t be shocked if you come across an alcohol checkpoint while driving at night or going to and from the suburbs.

Don’t let Mardi Gras Parade 2023 parking leave you in a tight spot – the Way out is right here on your phone! Book the best parking spots anywhere in your city at unbelievably cheap rates.

Is the Mardi Gras parade family-friendly?

Quite contrary to general perception, Mardi Gras is a family celebration. In fact, throws often include toys and stuffed animals. For instance, in the Garden District of St. Charles, families gather to watch parades, picnic, play ball, and enjoy the gorgeous ambiance. The only place you might not want to take your kids to would be the French Quarter (but there aren’t any major parades there, anyway).

How much does Mardi Gras cost? 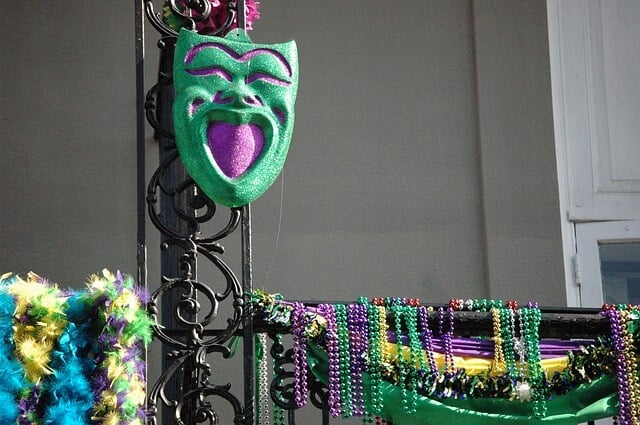 Not a thing! It’s totally free! In fact, you are quite likely to leave with bags and bags of Mardi Gras beads and throws. So what are you waiting for? Make plans to watch the Mardi Gras Parade 2023 right away!

Previous Post : « What You Need to Know About Certificates of Insurance (COIs)
Next Post : Kevin Hart and His Car Collection »