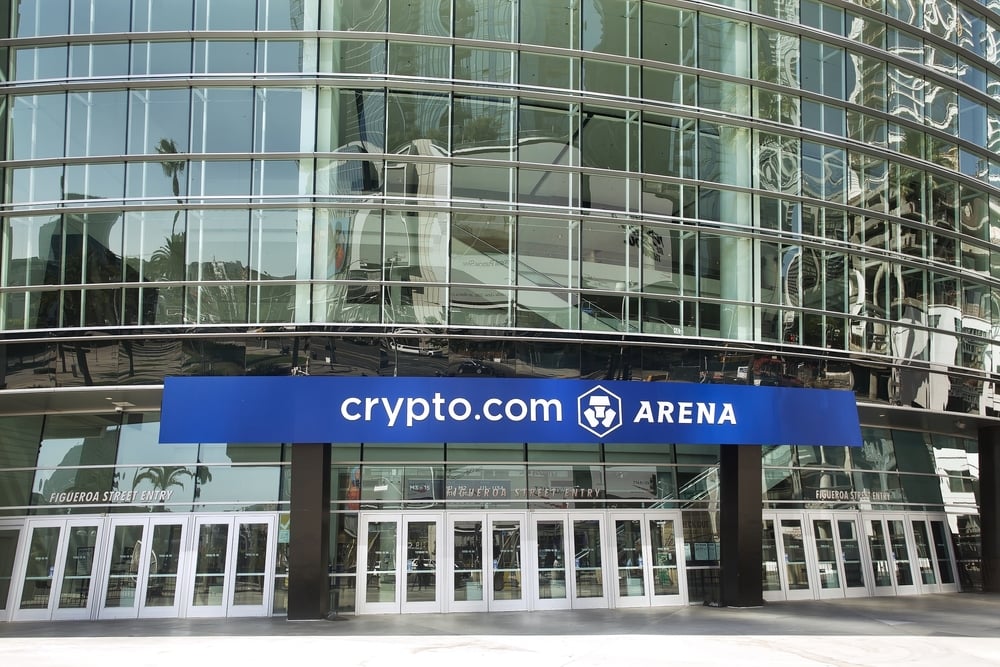 The Clippers’ arena in downtown LA has a new name! So, what else is new for the NBA team? If you haven’t been to a game for a while, let’s help you catch up on Los Angeles Clippers and their home court. Also, find out how to reach and get the best parking near Crypto.com Arena.

Los Angeles has two NBA teams – the Clippers and Lakers – and they share the city and an arena. Formerly known as the Staples Center, Crypto.com Arena is the only venue shared by two NBA teams. But that’ll change in 2024 when the Los Angeles Clippers move to their new home in Inglewood. Until then, you’ll have to find your way to the LA LIVE District to catch a Clippers home game.

Before we guide you to Los Angeles Clippers games at Crypto.com Arena, here’s a quick take on all you must know about the team:

When did Clippers move to LA?

The Clippers first joined NBA in 1970 as an expansion team from Buffalo, New York. The Buffalo Braves played eight seasons in the league’s Eastern Conference Atlantic Division before relocating to San Diego, California. The franchise adopted the name San Diego Clippers as a nod to the sailing ships in the Bay.

The Clippers stayed put at San Diego Sports Arena from 1978 to 1984 but never made it to the playoffs during all six seasons. In 1984, the franchise’s owner decided to relocate to Los Angeles. The move was initially not approved by the NBA and caused quite a controversy. However, the Los Angeles Clippers managed to get approval and now play in the league’s Western Conference Pacific Division.

When was the Clippers last in the finals?

Los Angeles Clippers made it to the Conference Finals in 2021 but lost 130-103 to the Phoenix Suns.

For almost three decades, the Clippers’ lackluster performance drew unfavorable comparisons to the Lakers – one of the most successful NBA teams. However, the team improved in the 2010s and earned some consistency as a postseason contender. Between 2012 and 2017, the Los Angeles Clippers qualified for playoffs six seasons in a row and won division titles in 2013 and 2014.

Los Angeles Clippers is the oldest franchise not to play in the NBA Finals yet. In 53 seasons since joining the league, the franchise has only made it to the playoffs 16 times. They finished third in the Pacific Division with a 42-40 (.512) record in the 2021-22 season.

Who is the Los Angeles Clippers coach?

The Clippers appointed Tyronn Lue as their head coach in 2020. He has been with the franchise as an assistant coach since 2019 and led them to their first Western Conference finals. Dan Craig is the assistant head coach now. Larry Drew, Brendan O’Connor, Brian Shaw, Jay Larranaga, Shaun Fein, and Jeremy Castleberry are the other assistant coaches on the current roster.

Tyronn Lue is a former point guard, and he’s played for the Lakers, Wizards, Orlando Magic, Rockets, Mavericks, Bucks, and Hawks. After his playing career ended in 2009, Lue joined the Celtics as their Director of Basketball Development. He was hired as an associate head coach by the Cavaliers in 2014 and promoted to head coach in the next season. Lue went on to help the Cavaliers win their first-ever finals game during his short tenure and became one of the few rookie coaches in NBA to do so.

When did the Clippers move to Crypto.com Arena?

The Clippers have played at Crypto.com Arena since 1999; it was known as Staples Center then. They share the LA LIVE venue with the Lakers, WNBA’s Los Angeles Spark, and NHL’s Los Angeles Kings. But the Clippers can finally have their own arena once the Intuit Dome opens in 2024.

After relocating to LA in 1984, the Los Angeles Clippers began playing their home games at the Los Angeles Memorial Sports Arena. Between 1994 and 1999, they occasionally played at the Arrowhead Pond of Anaheim – around 5-8 regular season games and a preseason game per season.

When the Staples Center opened only a couple of miles from the Los Angeles Memorial Sports Arena, the Clippers moved in, along with the Lakers and Kings.

When will the Intuit Dome open?

Los Angeles Clippers are planning to move into their new arena – the 18K-seater Intuit Dome – in 2024. It is now under construction in Inglewood, next to the Lakers’ former home, The Forum. SoFi Stadium, where NFL’s Rams and Chargers play, is just north of the new Clippers arena.

The Inglewood Basketball and Entertainment Center was greenlit in 2017 after the Los Angeles Clippers and the City of Inglewood signed an exclusive agreement. Clippers’ Crypto.com Arena lease expires in 2024, just in time for the new arena opening at Century Boulevard, Inglewood.

Clippers sold the naming rights to their new arena in 2021 to the financial software company Intuit for $500 million. As a result, the arena will be known as the Intuit Dome for the next 23 years.

Over 19,000 fans can attend basketball games at the Crypto.com Arena; the capacity for concerts and other events is even higher. With 2500 club seats, two-thirds of the arena’s seating is in the lower bowl. Additionally, Crypto.com Arena has 160 luxury suites on the three levels between the upper and lower bowls.

Where is Crypto.com Arena?

Crypto.com Arena, known as the Staples Center until 2021, is adjacent to the LA LIVE entertainment complex in downtown Los Angeles’ South Park District. The street address is 1111 S. Figueroa Street. The Figueroa Street stretch between Olympic and Martin Luther King Jr. boulevards is now Kobe Bryant Boulevard, and Crypto.com Arena is in this area.

Los Angeles Convention Center is immediately south of Crypto.com Arena, while LA LIVE venues like the Microsoft Theater and The Novo are within walking distance to the north. The arena is easily accessible by car and mass transit options. The Los Angeles Union Station is only a few miles away, while LAX is a 20-minute drive from the arena. The Dodger Stadium is also close, only around four miles from Crypto.com Arena.

What airport is closest to crypto com arena?

You can use Los Angeles International Airport (LAX) or the Hollywood Burbank Airport (BUR) to travel to Clippers’ games at Crypto.com Arena. Both airports are a 20-minute drive from the arena – Burbank Airport is 16.8 miles north of the Clippers’ home arena, while LAX is 16.5 miles southwest.

How to reach Clippers games at Crypto.com Arena

You have plenty of options for a hassle-free trip to the Crypto.com Arena during basketball season. But it’s LA, and most fans will drive to the arena. So, all you got to be careful of is the traffic and Clippers’ gameday parking.

If you are driving to the game, get directions to the Crypto.com Arena here or use the map below to plan your route:

AMTRAK has services to the Union Station in downtown LA. You can take the metro from here to Crypto.com Arena. Note: You’ll need separate tickets for the metro rail or bus connection.

Where is the rideshare drop-off area for Clippers games?

The designated drop-off/pick-up area for ridesharing services are the white zones around Crypto.com Arena. You’ll find these areas between LA Live Way and Georgia St. on Chick Hearn Ct. (Eastbound) and between 12th St and Pico on Figueroa St. (Southbound).

Look out for LAPD’s No Stopping signs on all other streets in the district to avoid a hefty LA parking ticket.

Is there Los Angeles Clippers parking near Crypto.com Arena?

LA LIVE garages provide official Clippers parking; there are around 3300 parking spots on site for Clippers games. Additionally, the neighborhood offers over 10K parking spaces within a 10-minute walking distance of the arena.

You can pre-book Los Angeles Clippers parking online or pre-pay at the Crypto.com Arena box office. Here’s what you need to know about on-site parking for Clippers games:

How much does Crypto.com Arena parking cost?

West Garage and East Garage parking rates start at $10, with a daily maximum of $28 – $30. When attending a Clippers game or any event lasting 3.5 hours or more, use the West Garage for a flat rate of $10 – $30 without validation. The rates vary according to the event.

Street parking near Crypto.com Arena is limited and will cost you around $2 for a couple of hours. Keep in mind that there are No Parking zones across the downtown entertainment district, especially on Chick Hearn Court. The area between Figueroa Street and LA LIVE Way is a designated Tow Away zone.

Also See: Street Cleaning in Los Angeles: Everything You Need to Know

If you don’t mind walking a few blocks, you can save up to 50% on Los Angeles Clippers parking. Find the lowest rates at downtown LA parking lots online – as low as $5 – $10 per day (up to 24 hours)! Find out more about affordable parking near Crypto.com Arena (Staples Center) here.

Previous Post : « How do I Replace a Lost Driver’s License in Ohio
Next Post : Washington Commanders at FedExField: A Complete Guide! »