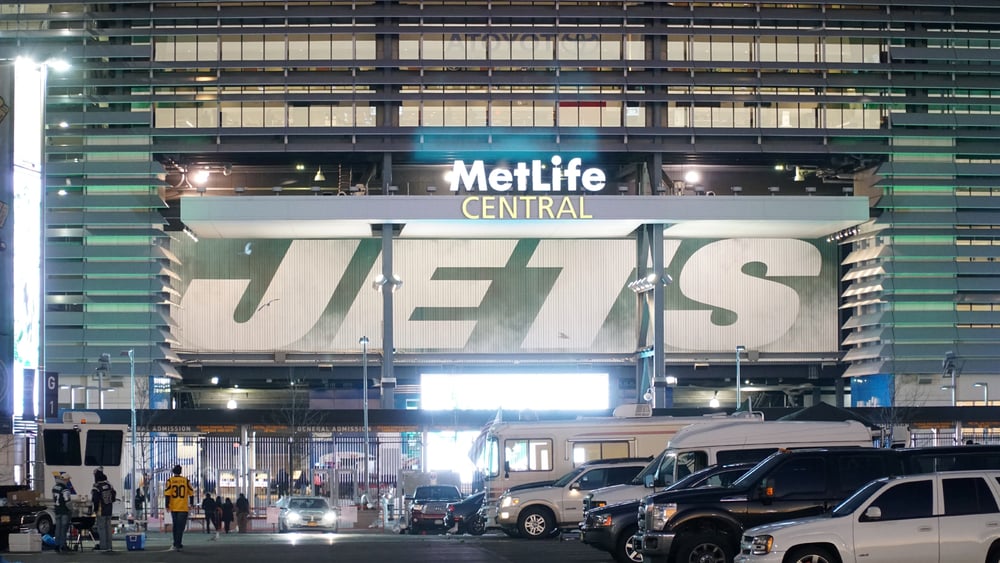 The New York Jets, unlike their city rivals, was formed in 1959 and is from Florham Park, New Jersey. Currently, they are members of the American Football Conference East Division and have one Super Bowl trophy in their cabinet. But they have failed to qualify for the NFL playoffs for more than a decade.

Despite their long spell of trophy less seasons, the fans have decided to stick with their family teams. For instance, the average attendance of the Jets has risen by more than 9000 fans for each home game in the 2022 season. Because of this, Jets games are currently in second place for per-game average attendance.

If you want to experience a complete NFL fan experience, visiting the New York Jets home stadium is for you. But with hundreds of thousands attending each game, you need to have a plan for your parking. We will help you learn more about each parking option and find cheap parking spaces near the home stadium. Also, read ahead for more details on the NY Jets schedule, tickets, team, and parking information.

What are the upcoming games of the Jets?

The Jets will be traveling to Gillette Stadium to meet the New England Patriots in the next game. Other opponents they will face in upcoming weeks include Chicago Bears, Minnesota Vikings, Buffalo Bills, Jacksonville Jaguars, and Seattle Seahawks.

New York Jets needs some wins to keep themselves open for a playoff chance. Visit the official team website for the complete New York Jets schedule. In addition, you can visit the same site for the latest NY Jets news and live scores.

Who is the coach of the New York Jets?

Robert Saleh is the current head coach of the Jets, and he joined them in 2021. With over 20 years of experience coaching NFL franchises, Saleh was part of one Super Bowl title win with the Seattle Seahawks as a defensive coach.

Other major members of the coaching staff include Miles Austin, Rob Calabrese, John Benton, Tony Oden, and many others. For the complete team of NY Jets coaching staff, visit the official team website.

What is the current New York Jets roster?

Some of the popular members of the active squad can be found below. The squad has played well so far, helping the Jets to second place in the East division table.

How much are the New York Jets tickets?

Single-game tickets are usually in high demand during the Jets games. The prices of these tickets will depend on the opposition; when the city rivals play each other, you can expect the ticket prices to go sky-high. In general, you can get a single-game ticket for as low as $50 per seat. At the same time, the higher the demand, these tickets may cost you more than $330 per seat.

For more passionate followers of the New York Jets, there are season tickets. By getting season tickets, you can access Jets rewards, savings on team merchandise, the best seats, free food and beverage options, and more. Similarly, group tickets for the Jets games can get you exclusive gameday access and discounted ticket pricing.

In addition, you can enjoy the games with friends and family at the club seats, suites, and other premium seating. Even though these are priced a bit higher, you can get additional privileges like exclusive food and beverage options. For more info about New York Jets tickets, visit here.

Which is the home stadium of the Jets?

The Jets play at MetLife Stadium in front of their home fans. Both Jets and Giants share this same stadium, which is one of the NFL’s biggest in terms of seating capacity.

How to get to MetLife Stadium

A few routes from Downtown Jersey could take you to the Jets stadium. You can choose between US-9 North and Tonnelle Avenue or US-1 North which is a combined distance of 9.1 miles. Another option is to drive nearly 12 miles through I-95 North to reach the stadium in about 20 minutes. The time taken might vary depending on the traffic conditions.

You could use a few public transit options to get to MetLife Stadium. These include both bus and train lines operated by NJ Transit that can get you closer to the New York Jets stadium. For example, use the NJT Bus number 353 and Coach USA bus number 351 to reach the stadium on home game days.

The Meadowlands Station is within 0.2 miles of the NY Jets stadium. You can walk to the stadium from the station after boarding an NJ Transit train.

What airport is closest to MetLife Stadium?

Newark Liberty International Airport is around 12 miles south of the New York Jets home stadium; takes abut 15 minutes by car from the airport to the stadium.

How far is JFK from Metlife Stadium? Almost 30 miles, which means it’ll take you at least half an hour via I-678. LaGuardia is closer – a little over 16 miles via NJ-495 W. However, you need to consider the traffic conditions and allow enough time if you are driving from these airports to the stadium.

Is there on-site parking at MetLife Stadium?

The New York Jets home stadium has different official parking lots designated as either Gold or Platinum spaces. You can pre-purchase parking passes for these facilities located near different stadium entrances.

Find a virtual seating map of the New York Jets stadium here. Using the map, you can easily find the best seats and corresponding entrances to use while booking tickets.

What are the cheap options for parking near MetLife Stadium?

Street parking is usually the first option most people choose for saving money. Some street parking spaces may be free for a limited time, while others charge a fixed amount for each hour. But unlike other options, parking in the streets for New York Jets is not a safe decision.

But there are off-site parking garages that offer a wide variety of features for different rates. These are at different locations around the stadium and offer cheaper rates than on-site garages. Besides, you will get special discounts for game days at private garages.

Is there street parking near New York Jets home stadium?

It is extremely rare to find on-street parking spaces near MetLife Stadium. The stadium is close to other sporting destinations like Quest Diagnostics Performance Center and the Meadowland Sports Complex. Similarly, there are other popular venues nearby which include restaurants and bars.

Most of the nearby streets will be filled with people hours before the game kicks off. Besides, even if you find a vacant spot, several risks are associated with leaving your car on the streets.

Why use off-site parking garages for New York Jets games?

Off-site parking garages are conveniently located compared to other options like street parking. You can easily locate these within walking distance from the stadium. Also, the rates at these facilities are cheaper than official lots. You can save more than $10 for hourly spots at some of the off-site parking garages.

You can avoid all risks associated with street parking by booking an off-site garage. There are no chances of theft as most of these garages have safety features. These include camera surveillance, security personnel, and lot attendants. So, you can watch the Jets game without worrying about your ride.

MetLife Stadium and the nearby streets are packed with fans and their vehicles on game days. By choosing to park in an off-site garage, you can save time by avoiding heavy traffic before and after the game.

In addition, you can enjoy premium features like valet parking, covered parking, ADA/Aisle access, paved parking spaces, and contactless parking at discounted rates. So, the next time you go for a home game with the New York Jets, get your car parked at off-site parking garages near MetLife Stadium.

How to find cheap parking garages near MetLife Stadium

The fastest option for finding an off-site parking garage near MetLife Stadium is by using an online parking service like Way.com. Both Way.com and the Way app can help you find off-site garages with the best rates in and around this neighborhood.

Enter the location where you want parking into the website or the Way app, along with the entry and exit times. Once you hit search, you will end up with a list of garages, features they offer, and corresponding parking rates. After choosing a garage and paying the respective rates, you will have a guaranteed parking spot for the next Jets home game.

Besides using Way.com, you can get additional benefits like discounts and special deals on charges at these off-site parking garages near the NY Jets stadium.

Previous Post : « The Farmers Insurance Guy: Who Is He?
Next Post : What Is the Arkansas Tint Law and Why Is It Important? »