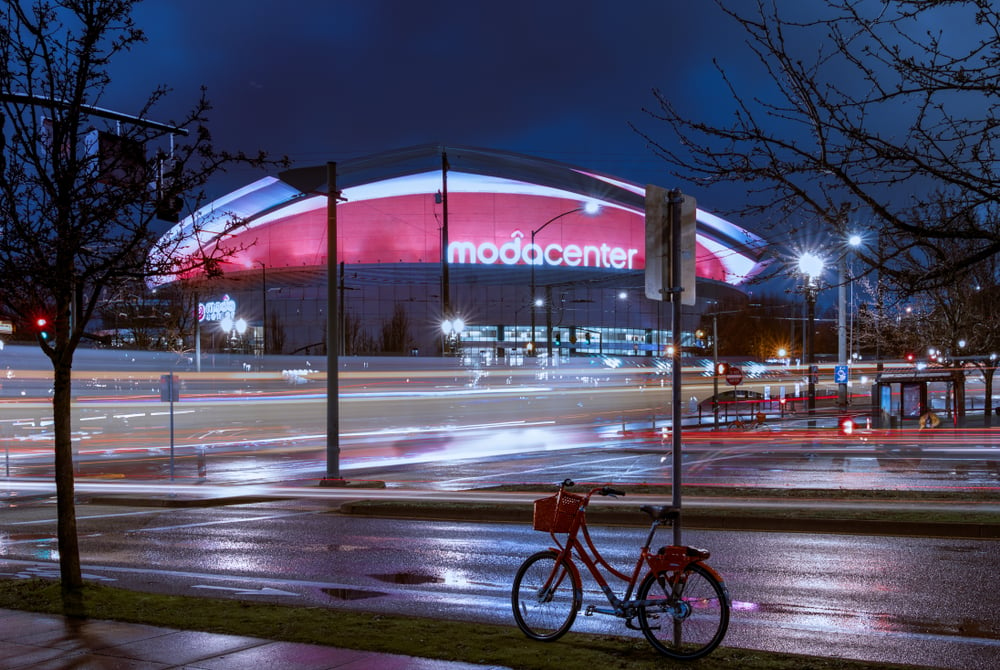 The Blazers have played home games in Portland’s Rose Quarter since the 70s. Loyal fans have no trouble finding their way to the arena – but it helps to stay updated on gameday rules and tips. So, here’s everything you need to know before the next Portland Trail Blazers game at Moda Center. Also, check out the cheapest gameday parking near Moda Center.

The Portland Trail Blazers began as an expansion team in 1970, and currently, they are the only NBA team from the Pacific Northwest. The Memorial Coliseum hosted the team’s home games for over two decades before the Blazers moved to the Moda Center, aka Rose Garden. However, both arenas are in the same Portland neighborhood – a 30-acre entertainment and sports district known as the Rose Quarter.

Before finding out more about the Portland Trail Blazers’ home arena and gameday parking, here’s a quick recap of the team’s best achievements, notable players, and more.

Portland Trail Blazers play in the Northwest Division of the NBA’s Western Conference. They reached the finals thrice (1977, 1990, 1992) and won the NBA championship once (1977). Out of 52 NBA seasons played, the Portland team qualified for playoffs 37 times. The Blazers also hold a playoff streak of 21 back-to-back appearances (1983 – 1995) – the second longest in the NBA.

Over the last four decades, the Blazers have built a strong fan base—Blazermania peaks for the usually sold-out home games. Between 1977 and 1995, the franchise sold out 814 games at the Memorial Coliseum consecutively. It was the longest streak in any major American professional sport until the Boston Red Sox broke the record.

What are the official team colors?

The Portland Trail Blazers’ official colors are black, red, and white. One side of the franchise’s “pinwheel” logo is red; the other is black or white. The logo graphically represents two five-on-five teams lining up against each other.

Blaze the Trail Cat, the Portland Trail Blazers mascot since 2002, is a mountain lion. A two-tone silver is the mascot’s official color.

Who are the all-time best Portland Trail Blazers players?

Bill Walton is one of the all-time best Portland Trail Blazers players; he was the Finals MVP in 1977 and the regular season MVP the next year.

Geoff Petrie, Sidney Wicks, Brandon Roy, and Damian Lillard are the four Blazer rookies to win the NBA Rookie of the Year award.

Who is the Blazers’ head coach?

Chauncey Billups has been the Portland Trail Blazers coach since 2021. The former NBA player has played 17 seasons in the league. Before his first head coaching job, Billups was an assistant coach for the Clippers under Tyronn Lue. In his first season with the Blazers (2021 – 2022), coach Billups finished with a 27-55 (.329) record and fourth place in the division.

Three Hall of Famers have coached Portland Trail Balzers in the past – Lenny Wilkens, Jack Ramsay, and Rick Adelman. In addition, former Blazers coaches Mike Schuler and Mike Dunleavy have won the NBA Coach of the Year award during their stint with the franchise.

Moda Center is one of two multipurpose arenas in Portland’s Rose Quarter, between the Willamette River and Holladay Park Medical Center. The other sports and entertainment district arena is the Memorial Coliseum, Blazers’ former home. The Oregon Convention Center, Broadway Bridge, and the Eastbank Esplanade are nearby.

Opened in 1995, the Moda Center was originally called the Rose Garden. Vulcan Sports and Entertainment owns the arena and the Portland Trail Blazers. In 2013, Moda Health Corporation acquired the arena’s naming rights for $4 million. However, loyal Blazers fans prefer their arena’s original name.

What happened to Blazers’ old arena?

Memorial Coliseum has a lower seating capacity for basketball than Moda Center (12,888). But it has hosted three NBA Finals in the past.

What is the seating capacity at Moda Center?

Moda Center can seat up to 19,980 for basketball games; the total capacity is 20,580 with standing room. The arena has two sections – the upper and lower bowls, separated by luxury boxes. There are over 14K permanent seats in the bowls and 1540 seats in the skyboxes. Additionally, the suites can seat up to 22 guests each.

When do arena doors open for Portland Trail Blazers games?

You can enter Moda Center 90 minutes before the game begins. Meanwhile, early entry and Courtside Club access on Portland Trail Blazers game days open half an hour earlier. In addition, Schonley’s Place and the 10 Barrel Taproom are open to the general public 2.5 hours before tipoff.

Note: Re-entry is not allowed at Moda Center for most events, including Blazers games.

How to reach Moda Center?

The Rose Quarter is in the Lloyd District, on Willamette River’s east bank – about two miles northeast of downtown Portland, across the Steel Bridge. If you drive to the game, it takes less than 10 minutes to reach Moda Center parking lots from downtown. The I-5, Holladay Street, Weidler Street, Broadway, and Interstate Avenue connect the sports and entertainment district to other parts of the city.

Use the map below to plan your route to the Blazers arena, or see detailed driving directions here.

Leaving the car at home or a cheaper Portland parking lot away from the arena? Public transit to Moda Center is easily available via bus or train services.

Rose Quarter Transit Center is south of the arena, in an underpass where the tracks cross I-5. Red, Blue, and Green lines stop here.

The Yellow line serves Interstate/Rose Quarter Station on the southwestern side of Rose Quarter, on Interstate Avenue.

See: The Comprehensive List of all NBA Teams, Arenas and Parking (2022-23)

Blazers’ parking is available at the four Rose Quarter garages on game days. Overall, 2600 parking spaces are available near Moda Center. Additionally, the arena operates 1700 spaces at two off-site surface lots a few blocks away at NE 7th and Multnomah. Both lots are on MAX Light Rail lines that serve Rose Quarter. On-street parking is also available near the Blazers’ arena.

How much does Blazers gameday parking cost?

Is there cheaper gameday parking near Moda Center?

Book a gameday parking near Moda Center for the whole day saves your time and money. You don’t have to worry about time limits, either. Pay the daily rate at affordable garages this and explore the neighborhood before and after the game without worrying about the safety of your car.

Previous Post : « How to Register Your Car in Georgia
Next Post : What’s Haunting Portlock, Alaska? And More Mysteries…   »