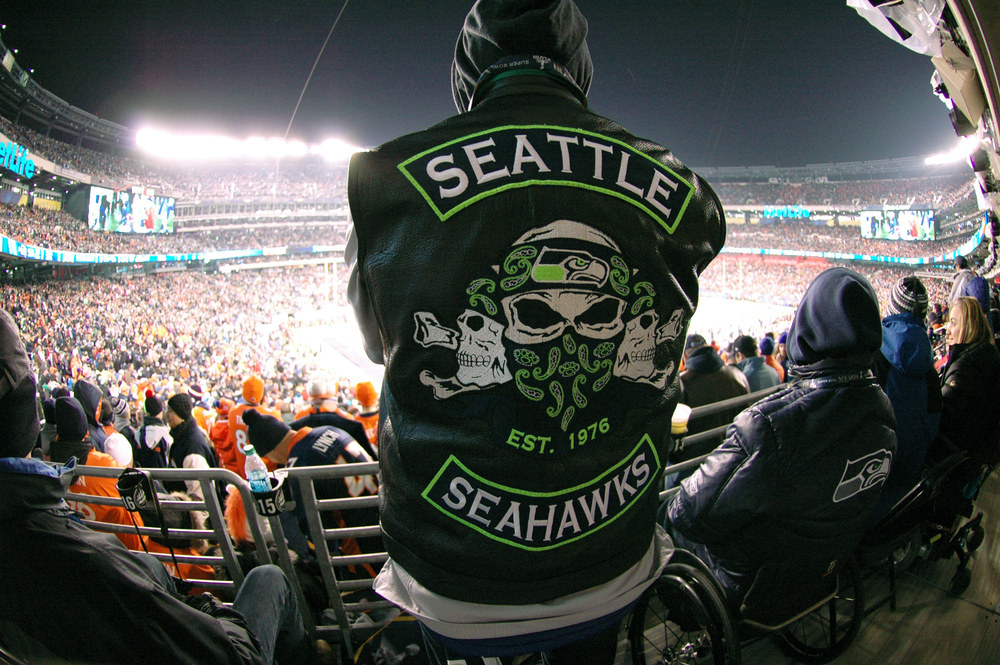 Got tickets for the next Seattle Seahawks game at Lumen Field? This might not be your first visit to the stadium in SoDo, but a quick recap on game day policies and tips guarantees a hassle-free experience. So, here’s your guide to the best parking near Lumen Field, game day transit, stadium entry, and more.

As the only NFL team from the Pacific Northwest, the Seattle Seahawk enjoys a large fanbase spanning several states and Canadian territories in the region. In addition, Lumen Field has carried on Kingdome’s reputation for really loud games. Sold-out seasons aren’t rare for the Seahawks, and if you aren’t a season-ticket holder, plans for your next game day in Seattle could use a few tips.

New Seattle Seahawks fan? Here’s all you must know about your NFL team before watching your first home game at the stadium:

The Seahawks began their NFL journey as an expansion team in 1976 and played their first season in the NFC West division. But soon, they moved to AFC West and stayed until their return to NFC after the 2002 conference realignment.

Seattle Seahawks is the only NFL team to play both NFC and AFC championship games. They have 11 division titles so far – nine in NFC and 2 in AFC. But all three of their conference championships (2005, 2013, 2014) are in NFC.

Starting in 1983, Seattle Seahawks have made 19 playoff appearances and advanced thrice to Super Bowl. But they have only one league championship title – the Seahawks defeated Denver Broncos 43 – 8 to clinch Super Bowl XLVIII (2014). Unfortunately, they lost Super Bowl XL to Pittsburgh Steelers and Super Bowl XLIX to New England Patriots.

Who is the Seattle Seahawks coach?

Pete Carroll has coached the Seattle Seahawks since 2010. He is also the NFL franchise’s Executive Vice President of Football Operations and is the eighth head coach in its history.

Coach Carroll has previously worked with the New York Jets and New England Patriots. However, after failing to make a mark, he shifted his focus to USC. Eventually, Carroll returned to the major league to coach the Seahawks. This time, he found success and led his team to playoffs nine times.

Under Carroll, the Seahawks have clinched the division title five times and made two back-to-back Super Bowl appearances. The Seattle franchise also won their first and only Super Bowl with him.

Where do the Seahawks train?

Virginia Mason Athletic Center (VMAC) – the Seattle Seahawks training center is next to Lake Washington in Renton, a suburb of Seattle. The facility has four full-sized practice fields – one indoor and three outdoor natural grass fields.

Who are the Seahawks fans and rivals?

Seattle Seahawk fans are called 12s – originally the 12th Man, but it was shortened due to controversies. Trademark lawsuits continue to chase the franchise. However, they are sticking with their fans and are renowned for raising a massive #12 flag at their home stadium before kickoff.

The 12s and their team do not get along well with the San Francisco 49ers and Los Angeles Rams. Arizona Cardinals, Denver Broncos, and Green Bay Packers are the Seahawks’ other rivals in the league. Expect the crowds and decibels at Lumen Field to peak when these teams visit Seattle.

Who are the best Seattle Seahawks players of all time?

Where do the Seahawks play their home games?

Seahawks have played their home games at a stadium south of downtown Seattle since their first NFL season. They began playing at the Kingdome (King County Stadium) in 1976 and stayed put until 1999. The massive 660-feet-wide domed stadium was also home to the MLB’s Mariners and NBA’s Supersonics.

Much of the home advantage at Kingdome came from its distinction as one of the loudest NFL stadiums. As a result, visiting teams practiced with jet engine sounds or rock music to get accustomed to the disruptive environment created by the 12s.

The aging Kingdome was eventually demolished in March 2000, and the new Seattle Seahawks Stadium (now known as Lumen Field) opened at the same site in July 2002. The team briefly used Husky Stadium while their new home was under construction.

Seahawks’ first appearance at the new stadium was a preseason game against the Colts on August 11, 2002. They lost that game 28-10 but went on to end their first season at Lumen Field with a 7-9 record. The next season (2003), they remained undefeated at home and made it to the playoffs.

The Seahawks entered the postseason again in 2004 and played their first playoff game at the new home stadium in January 2005. The next year, they won their first-ever NFC championship but lost the Super Bowl.

Since 2003, the Seattle Seahawks have mostly played before sell-out crowds at their home stadium. The “one of the loudest stadiums” reputation was passed on from Kingdome to Lumen Field. Some credit is given to the partial roof and seating deck trap that amplify the fan cheers. The noise levels at the Seattle Seahawks stadium result in a home-field advantage fueled by increasing false starts and delay-in-game penalties for visiting teams.

The 12s have set two Guinness World Records for the “loudest crowd roar at an outdoor stadium” – at 136.6 decibels and then at 137.6 decibels.

How did Lumen Field get its name?

The new stadium that replaced Kingdome was originally called the Seahawks Stadium. However, the naming rights were sold in 2004, and it was renamed Qwest Field. When CenturyLink acquired Qwest in 2001, the name changed to CenturyLink Field, and the stadium was nicknamed “The Clink.” In 2020, CenturyLink rebranded to Lumen Technologies, and the stadium got its current name.

What are the best features of Lumen Field?

Lumen Field is a multi-purpose stadium, and it stands on the former site of Kingdome – the Seattle Seahawks’ original home stadium. MLS’s Seattle Sounders FC also play their home games at this stadium.

Downtown Seattle is only about a mile north of Lumen Field, and its distinct skyline is visible from the stadium. The Seahawks Stadium is U-shaped with an open north end. You can also see the adjacent T-Mobile Park’s retractable roof and Mount Rainier beyond through the partially open south end of the stadium. 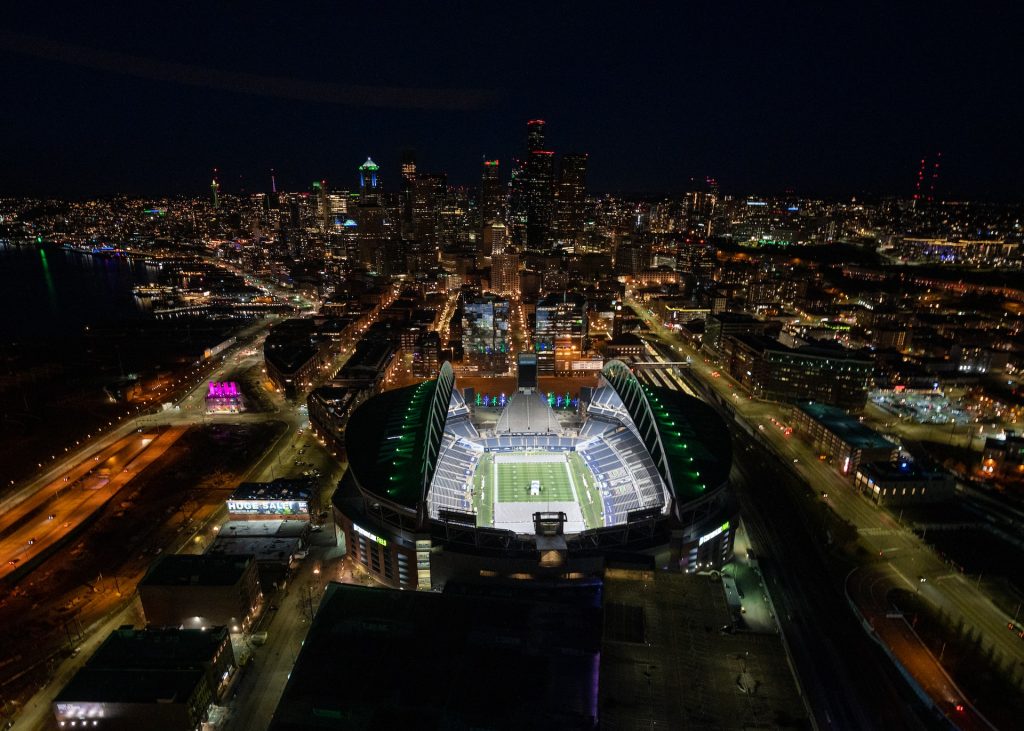 The stadium’s open north end has a 13-story tower with a vertical scoreboard. At the base of the tower, there’s bleacher seating for 3000, called the “Hawks’ Nest.” Lumen Field also has field-level luxury suites behind the north end zone. These features are uncommon for NFL stadiums in the country.

What is the Seattle Seahawks stadium seating capacity?

Lumen Field can officially seat up to 68,740 ticket holders for NFL games. However, the seating capacity is expandable to 72,000 for special occasions. The partially open roof covers 70% of the seats in Lumen Field and leaves the playing field open.

The stadium has around 111 suites and 7000 club seats for premium seating. In addition, 1400 seats are available for ADA and companion seating across several sections.

Where is Lumen Field in Seattle?

Lumen Filed is in the SoDo neighborhood, about a mile south of downtown Seattle. The Industrial District, Pioneer Square, and International District border the stadium. Seattle Mariners’ T-Mobile Park is nearby, just across from Lumen Field parking garage.

The street address for Lumen Field is 800 Occidental Ave S. Check out the map below for the exact location and plan your route to the next Seattle Seahawks game:

How to reach Lumen Field for Seahawks games?

Rail, bus, ferry – you have multiple mass transit options to reach Lumen Field on game days. Of course, driving to the game is also an option, as long as you have a parking spot waiting and get past the traffic delays. Downtown and SoDo get pretty busy on Seattle Seahawks game days; traffic restrictions could be placed closer to the stadium.

Lumen Field is easily accessible by major roadways; the Interstate 5 – Interstate 90 junction is to the east. SR 519 connects I-90 to the neighborhood, while SR 99 borders it on the western side. Ramps over the train tracks along the stadium’s eastern side allow easier access from that direction. To the south of the Lumen Field complex, the South Royal Brougham Way also has an overpass.

Note: If you usually take the Seahawk game day buses from park-and-ride lots to the stadium, look for an alternative. King County Metro Transit’s express gameday service is no longer available.

Which airport is closest to Lumen Field?

Lumen Field is most conveniently served by flights into Seattle Tacoma International Airport (SEA). On I-5 north, it will take you 14 minutes and 12.4 miles. It’ll take you 16 minutes to get there if you take WA-509 N and Hwy 99 N.

When do the gates open for Seahawks home games?

You can leave and re-enter the stadium until kickoff. After that, re-entry is not allowed unless it is a medical emergency.

Lumen Filed parking garage has 2000 spots – these are pre-bookable on a seasonal basis. Unfortunately, day-of-game parking is unavailable at the stadium garage or North Lot. However, you can book single-game parking spaces at nearby lots and garages. There are over 8400 parking spaces within a 15-minute walk of Lumen Field.

A last-minute parking spot hunt isn’t a good idea; with traffic delays and peak demand, there’s no guarantee you’ll find an affordable spot before the game begins. The demand spills out to the downtown area too, so it’s best to pre-book your gameday parking near Lumen Field online.

Where can I find cheap Seahawks parking?

With Lumen Field parking spots sold seasonally, there’s a massive demand for off-stadium parking spaces on game days. As a result, most fans pre-book their spots to avoid peak pricing and a long walk to the stadium. The Union Station Garage and the Mariners Garage are popular, but there are several other options around the Seahawks stadium. For the best deals, look for a garage or surface lot around Pioneer Square or south of the Mariners’ ballpark.

Where can I find ADA parking near Lumen Field?

Lumen Filed North Lot has limited ADA parking spots. If these are vacant on gamedays, on-site ADA/Accessible parking might be sold on a first-come, first-served basis.

You’ll find additional ADA parking at Union Station Garage on 4th Avenue. Take the elevator at Weller Street and 4th Avenue and use the overpass to the Lumen Field North Lot to avoid stairways.

Where is the drop-off/pick-up area?

The designated drop-off/pick-up zone is across from Lumen Field Pro Shop, off the Railroad Way S intersection at Occidental Avenue. You can access it via First Avenue and drop off passengers before parking; drop-offs are allowed till kickoff. However, there may be delays for pick-ups due to traffic after the game.

RV Parking and tailgating are not permitted at Lumen Field. You’ll, however, find several lots near the stadium where Seahawks fans tailgate – like the one at 8th and Holgate. Pre-game experiences like Touchdown City are also popular.

Also See: The comprehensive list of all NFL Teams and stadiums (2022)

Previous Post : « Funny Car Names: More than 30 Names to Choose From
Next Post : Is the Acura a Good Car? Here’s Way.com’s Unbiased Review »