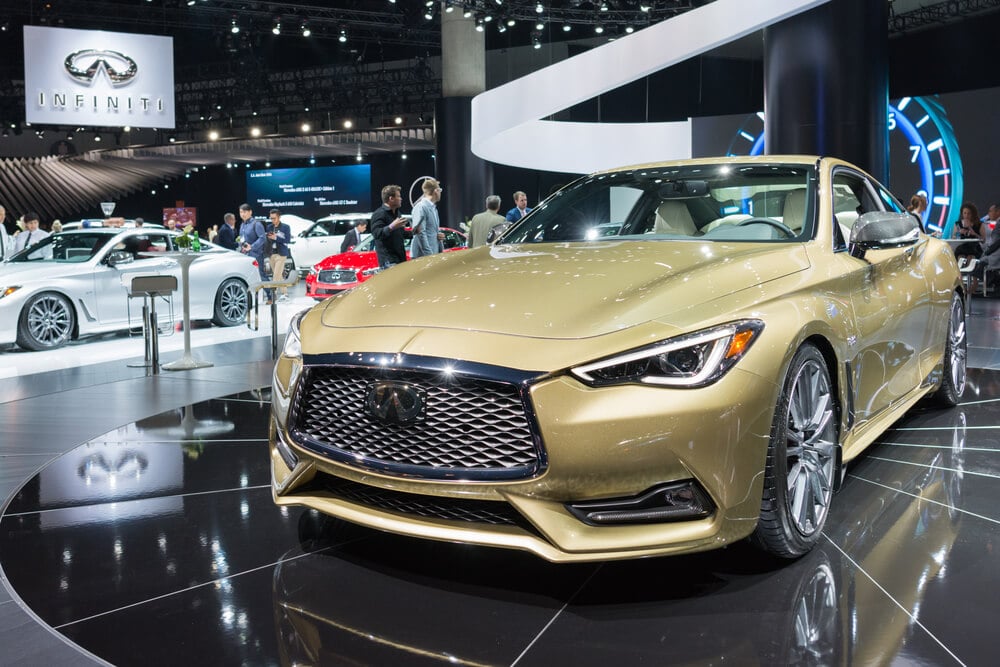 You’ve certainly heard about it; you’ve even surely seen some on the roads! We’re talking about Infiniti cars, people! It’s common knowledge that Infiniti is a car brand. Yet few people can identify the company behind it or where they’re made. So who makes Infiniti cars?

For more than 35 years, people all around the world have been able to buy Infiniti’s high-end automobiles. Over that time, it has built a strong reputation as a classy option for everyday usage, thanks to its low-key and straightforward design. To be very honest, the Infiniti name isn’t universally regarded as the pinnacle of automotive excellence or even luxury. However, it appeals to a specific demographic of customers who value convenience, simplicity, and practicality over flashy flourishes.

A drive down the Infiniti memory lane

The Nissan Horizon Task Force, an elite group of designers and engineers, was responsible for launching the brand in 1985. According to Infiniti of San Jose, the team was tasked with establishing a new premium brand within Japan’s Nissan Motor Company that would differentiate itself from existing Nissan models by emphasizing performance and luxury.

While Infiniti was first introduced in 1985, it wasn’t until 1989 that the brand formally launched. In 1987, Nissan began rebranding some of its luxury automobiles under the Infiniti name. It then eventually became a separate subsidiary of Nissan in 1989.

More about the Infiniti brand

The infinity point at the end of the two lines in the Infiniti emblem signifies the company’s commitment to research and development.

On the other hand, many think the shape of those two lines pays homage to Mount Fuji, the symbol of Japanese culture’s pinnacle of quality, refinement, and technological accomplishments.

Throughout the 1990s, Infiniti expanded its model selection, giving buyers more options for elegant, sporty, and surprisingly affordable luxury cars. The brand was quick to see the potential of the luxury SUV market, and the QX4 was among the first of its kind to hit the market.

In the early to mid-2000s, Infiniti found its footing with the release of the excellent G35, a luxury sedan widely regarded as superior to the luxury automobile benchmark at the time, the BMW 3 Series, by driving fans and automotive journalists.

After establishing a strong reputation in the American market, the company branched out into the European and Chinese markets in 2008 and 2013, respectively, becoming a more significant player on the global stage. Although Nissan was founded in Japan, Infiniti has no official presence there.

Which are the best Infiniti cars?

The I30 was released in 1998 to replace the J30. It came in two trim levels and quickly became a best-seller thanks to its attractive design and impressive performance. It could go to 60 miles per hour in 7 seconds because of its 190 hp, 3-liter V6 engine, and 5-speed manual transmission. Its highest speed was 139 miles per hour. 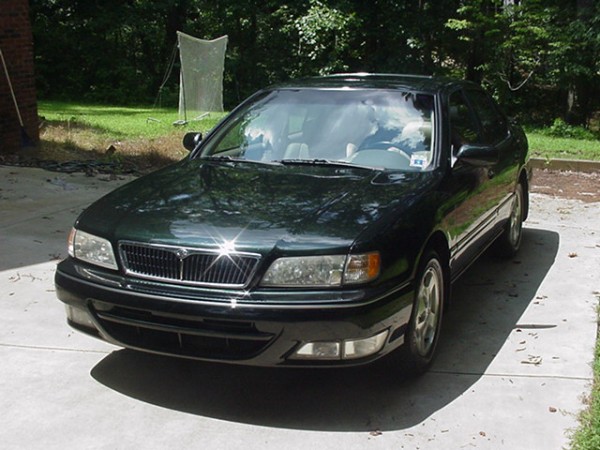 The I30’s luxurious interior is a statement unto itself with its heated leather seats, Bose sound system, and wood grain trim on the center console. The suspension uses a dependable and reasonably priced lateral link/control rod arrangement, which aids in reducing body roll when cornering. 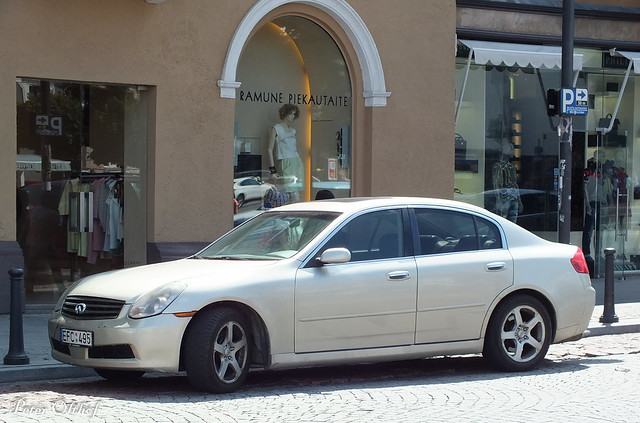 “Infiniti G35 as Police Car” by avriette is licensed under CC BY-NC 2.0

The M35 Sport, when combined with its 5-speed automatic transmission, could reach 60 mph in 6.1 seconds and complete the quarter mile in 14.8. It included various safety and comfort-oriented technological features and could go across rugged terrain.

The Q45 is a full-size luxury sedan that came out in 1989 for the 1990 model year. It is built on the same platform as the Nissan President. For the 2006 model year, a 4.5-liter V8 engine with 340 horsepower and 333 lb-ft of torque was joined with a redesigned 5-speed automated transmission.

Inside was a 300-watt Bose sound system with power-heated and cooled seats amidst a dark maple wood and chrome trim. The Q45 comes standard with features including adaptive cruise control, emergency brake assist, and Infiniti’s Vehicle Dynamic Control to help the driver.

For the 2016 model year, Infiniti introduced the Q30 at the 2015 Frankfurt Motor Show. The Q30 is a five-door hatchback based on the same platform as the Mercedes-Benz A-class. The three different versions of the Q30 share many parts with the Mercedes Benz GLA, but the latter is more expensive.

It has an impressive 208 horsepower and 258 lb-ft of peak torque from its 2.0-liter turbocharged inline-4 engine and a comparatively high 7.5-inch ground clearance. The 2017 Infiniti Q30 is a luxury car that offers excellent value for the money. It is easily recognizable as an Infiniti, yet it is just as refined as the GLA.

The Infiniti Q70, manufactured from 2013 to 2019, is a comfortable five-seat mid-size luxury sedan that is essentially an upgraded M Series. The available Q70 engines can propel you through your daily life or any other activity you like to undertake.

The standard 3.7-liter V6 engine produces 330 horsepower. The larger 5.6-liter V8 produces 420 horsepower and 417 pound-feet of torque. The Infiniti InTouch system, which enables enhanced connectivity, is just one of the many convenient features and helpful driving aids available in the Q70.

Where are Infiniti cars made?

Although Infiniti vehicles have historically been manufactured in several countries worldwide, they mostly target the North American market. Sedans for the brand primarily come from Japan. SUVs and crossovers come from Mexico, the United States, and Japan.

However, the huge QX80 is the only Infiniti SUV that is assembled in Japan. The Nissan Armada SL is essentially the high-end variant of the standard Armada.

To keep up with the times and stay in business, Nissan Motor Company realized they needed to create vehicles that met the standards of the premium segment. Nissan’s luxury brand Infiniti was launched in the 1980s.  It came with a new style and attitude from the parent company. After its creation in Japan, the Infiniti brand quickly rose to fame around the world. Then, as its popularity grew, it rapidly expanded across the globe.

These cars cater to those who value subtlety over flash. Instead, Infiniti has figured out how to appeal to a specific subset of car buyers. Those people who value having access to high-quality, user-friendly electronics in a stylishly arranged cabin.

Irrespective of your Infiniti car model, you must have it covered. The cost of Infiniti car insurance will vary based on some factors. This includes the type of policy, the car’s age and model, and the insured person’s driving history. It’s important to compare quotes from multiple insurers to ensure you get the best value for your money.

Luckily Way.com is here to help you do just that. Simply download the Way App and get quotes instantly. Choose and buy the Infiniti car insurance that suits you best!

Previous Post : « Warren Buffett’s Cars: What Cars Does the Investment Mogul Own?
Next Post : Way.com and Upside Partner to Drive Gas Cash-Back Offers to the Car Super App’s Customers »